Similar to any other video format, the chances of MP4 files being corrupt is common. If you have such MP4 video file corruption issues, you are on the right track. The article explains the various methods to deal with damaged, inaccessible or corrupt MP4 media files using different approaches and guides you to repair corrupt MP4 video files easily. 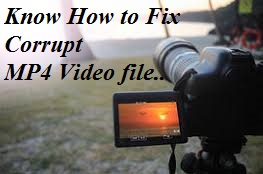 Why Do MP4 Files Get Damaged?

There may be number of reasons why videos aren’t played on the device, most common reasons are listed below:

As we all know MP4 is the most commonly used file format to record or save your video files. MP4 video files are prone to corruption due to many reasons. At times, while attempting to access videos, you might encounter issues like choppy videos, no sound in the videos or cannot play the video file errors.

Here is one user case scenario with codec issue in his MP4 video:

I use Windows 8.1-64 and BS Player 2.72. Yesterday when I was playing a few recorded videos that were saved in MP4 file format, the video stopped playing. I checked with the codec manager and found that some codec’s were missing: FFDShow, MPEG audio decoder, Haali media splitter. If I check them and hit “Install selected” nothing happens. Please help me; how can I repair my MP4 videos?

Why Is My MP4 Video Corrupted?

There may be number of reasons why videos aren’t played on the device, most common reason are listed below:

In any of the above mentioned scenarios, your MP4 videos stop playing. Now, the question is how to repair the corrupted MP4? Let’s see the universal method to fix corrupt MP4 video files. Also, you can also repair corrupt GoPro videos using methods explained here.

How to Fix Corruption in MP4 Files?

How to Repair MP4 File in VLC Player?

You can easily repair the MP4 files using VLC media player. VLC includes a large number of encoding and decoding libraries (codecs) that makes VLC compatible with almost many video formats to play. Therefore, it makes your video temporarily compatible to play on the media player.

To repair MP4 video, you will have to follow these steps:

Why are MP4 videos not played on VLC?

Although VLC media player is widely used for repairing corrupt MP4 videos, there are problems in VLC while playing mp4 files. Few of them are listed below:

In such situations, to keep your video safe and secure, it is highly recommended to use an efficient Video repair tool.

SFWare MP4 Repair tool is the safest way to make your unplayable MP4 videos play. It works on the copy of the original file i.e., in read only mode. Hence, data is safe from further corruption. It works on the audio and video streams separately and provides a healthy playable video file.

The software is available for both Windows and Mac operating systems. Download the tool now and repair your MP4 file in 3 simple clicks.

To repair severely corrupt MP4 files or to fix any issues related to MOV/MP4, download and Install SFWare MP4 Video Repair Software (Windows / Mac) and follow the steps shown below: 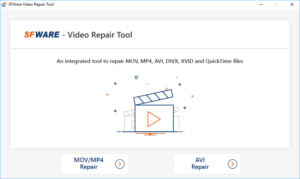 Step 2: Provide any healthy working MP4 video file and a corrupt file that you want to repair. Click on the Repair button. 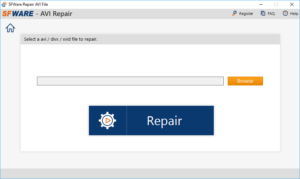 Step 3: Once the repairing process completes, Preview the repaired MP4 video file and Save the file in your desired location.

Keep a backup of your original data before making any changes that alter the content of the videos.

Consider using more than one backup method: USB, CD, DVD, cloud storage, etc. In this way, if your PC’s hard drive is damaged, you would have more than one alternative to recover your information.